Melanie Brulée – the Philadelphia Folk Fest alum who has earned raves from The Boot, The Bluegrass Situation, and No Depression – will tour in February. SXSW has invited her to play an official showcase (venue and date TBA). Her new album ‘Fires, Floods & Things We Leave Behind’ brilliantly parallels a cinematic western sound with themes of moving on from addiction and loss. 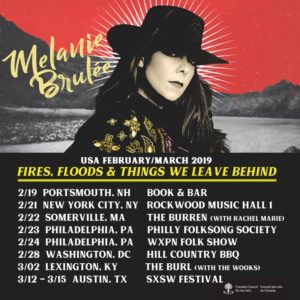 No Depression attested, “Melanie Brulée’s new album, Fires, Floods & Things We Leave Behind, explores the wide open spaces of the Wild West — and she’s got the voice to fill it.” The Boston Globe praised her “echoing, spaghetti-western sound,” going on to said that she “carries it off with aplomb.”

Brulée will appear live in the studio on Philadelphia’s tastemaker radio station WXPN on February 24.