Rebecca Loebe has signed with Blue Corn Music for her February 8 release ‘Give Up Your Ghosts.’ Though she appeared on the Voice in 2011 and was courted by Adam Levine and Christina Aguilera (eventually joining team Adam), Loebe has built her reputation through road-dogging, one show and one fan at a time. It’s resulted in over 50,000 fans on social media; support slots for The Civil Wars, Mary Chapin Carpenter, and Gregory Alan Isakov; airplay on over 600 stations for her previous album ‘Blink.’ ‘Give Up Your Ghosts’ marks the fifth album and a high-water mark of storytelling and emotional power for the Austinite. Music video: https://www.youtube.com/watch?v=yTJ7XHEquq4

Melanie Brulée – the Philadelphia Folk Fest alum who has earned raves from The Boot, The Bluegrass Situation, and No Depression – will tour in February. SXSW has invited her to play an official showcase (venue and date TBA). Her new album ‘Fires, Floods & Things We Leave Behind’ brilliantly parallels a cinematic western sound with themes of moving on from addiction and loss. No Depression attested, “Melanie Brulée’s new album, Fires, Floods & Things We Leave Behind, explores the wide open spaces of the Wild West — and she’s got the voice to fill it.” The Boston Globe praised her “echoing, spaghetti-western sound,” going on to said that she “carries it off with aplomb.” Performance video: https://www.youtube.com/watch?v=6wllJ1ODi30 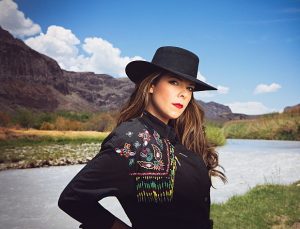