“At their shows they fling open the imaginary barrier between players and listeners, entreating the crowd to shout, sing and dance right up to the stage… Think folk music is stodgy? Think gospel music is square? Spirit Family Reunion proves yet again that it’s a renewable resource, belonging to whomever enters its magical sphere.” – Ann Powers, NPR Music

“Spirit Family Reunion built up an audience the simple way: by kicking up plenty of dust and bringing down the house.” – Andrew Leahey, Rolling Stone Country

“One Way Ticket” on Spotify: https://open.spotify.com/track/3Chpm9YpKgP0lrAeLAMnfY?si=JJeB2P77Tumj2pAGUq8rjg

Fans will notice a wider variety of instrumentation on a number of songs, from electric guitar to a horn section on “Gradual Power,” though their signature harmonies, Maggie Carson’s banjo, and Stephen Weinheimer’s washboard are alive and well. 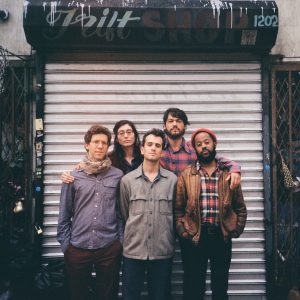 Banjo player Maggie Carson contributes lead vocals to the rousing old-time tune “When I Get Home” while washboard man Stephen Weinheimer sings vulnerably about a moment of self-doubt in “Moon In The Mirror.” The insightful “Gradual Power” finds the band exploring the cyclical nature of things. Nick Panken wrote “Come Our Way” towards the end of 2016, exploring the balance between individual action and acceptance on the course of events. The band continues its commitment to traditional folk music with a rousing interpretation of the cowboy classic “Whoopie Ti Yi To.”

Of the single, Panken says, “This is a song about self empowerment, solidarity among outcasts, a thirst for trespassing borders that uphold convention. Being alive is the only permission you need to be here. That is your one way ticket, and it’s as valid as the rest. Though our societies invent criteria that inflict very real suffering upon a multitude of beings, we are all entitled to claim dignified lives simply because we are here. Ultimately this is more real than any fabricated rule or restriction, and this song suggests that the validation you need is contained within you.”