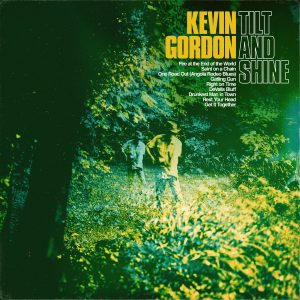 Kevin Gordon’s Louisiana is a strange place. In his songs, it’s a place where restless teens road trip to where the highway dead-ends at the Gulf of Mexico; a place where prisoners who are in for life compete in a rodeo in front of spectators; where a man can get lost in the humid afternoon and where religion may not signify hope; where the KKK greets a high school marching band and its African-American teacher along a parade route; where a post-ZZ Top show hang out outside a McDonald’s reveals a hidden gun; where a Pontiac GTO gets stolen, ends up in a lake, and punishment takes precedence over remuneration; where half-Comanche folksinger Brownie Ford can escape death and proffer advice on staying real and free; where Jimmy Reed is the true king of rock & roll; and where rivers, never far away, carry secrets behind levees.

The kicker? All of these songs are based on true stories. Kevin Gordon has been exploring Louisiana for twenty years now, on the eve of the release of his powerful new album Tilt & Shine, out July 27, 2018 on Crowville Media. “One of the things I like about it and am mystified by is that what passes for normal in Louisiana would not make the grade elsewhere,” Gordon says. He continues, “It’s only 4 ½ or 5 hours from Monroe,where I grew up,to New Orleans; the influence of south Louisiana, the Acadian culture, the diverse influences of New Orleans, all that stuff kind of floats around the state.” Gordon’s MFA from the Iowa Writers’ Workshop allows him to capture it with a degree of precision. As the New York Times put it in its headline of a feature on Kevin, “A Musician Or A Poet? Yes to Both.” Lucinda Williams said, “He’s writing songs that are like short stories” and noted music journalist Peter Guralnick has said, “Think of John Lee Hooker tied to the hard, imagistic poetry of William Carlos Williams, and you get a little bit of the picture.” With all these accolades, it’s no wonder that Gordon’s songs have been covered by the likes of Keith Richards, Levon Helm, Irma Thomas, The Hard Working Americans (featuring Todd Snider), Ronnie Hawkins, Sonny Burgess, and Southside Johnny.