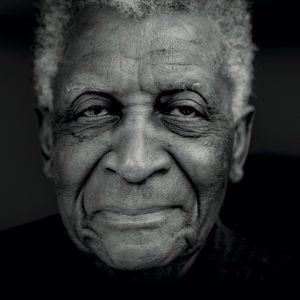 Abdullah Ibrahim, South Africa’s most distinguished pianist and a world-respected master musician, was born in 1934 in Cape Town and baptized Adolph Johannes Brand. His early musical memories were of traditional African Khoi-san songs and the Christian hymns, gospel tunes and spirituals that he heard from his grandmother, who was pianist for the local African Methodist Episcopalian church, and his mother, who led the choir. The Cape Town of his childhood was a melting-pot of cultural influences, and the young Dollar Brand, as he became known, was exposed to American jazz, township jive, Cape Malay music, as well as to classical music. Out of this blend of the secular and the religious, the traditional and the modern, developed the distinctive style, harmonies and musical vocabulary that are inimitably his own.

He began piano lessons at the age of seven and made his professional debut at fifteen, playing and later recording with such local groups as the Tuxedo Slickers. He was in the forefront of playing bebop with a Cape Town flavor and 1958 saw the formation of the Dollar Brand Trio. His groundbreaking septet the Jazz Epistles, formed in 1959 (with saxophonist Kippie Moeketsi, trumpeter Hugh Masekela, trombonist Jonas Gwanga, bassist Johnny Gertze and drummer Makaya Ntshoko), recorded the first jazz album by South African musicians. That same year, he met and first performed with vocalist Sathima Bea Benjamin; they were to marry six years later.

After the notorious Sharpeville massacre of 1960, mixed-race bands and audiences were defying the increasingly strict apartheid laws, and jazz symbolized resistance, so the government closed a number of clubs and harassed the musicians. Some members of the Jazz Epistles went to England with the musical King Kong and stayed in exile. These were difficult times in which to sustain musical development in South Africa. In 1962, with Nelson Mandela imprisoned and the ANC banned, Dollar Brand and Sathima Bea Benjamin left the country, joined later by the other trio members Gertze and Ntshoko, and took up a three-year contract at the Club Africana in Zürich. There, in 1963, Sathima persuaded Duke Ellington to listen to them play, which led to a recording session in Paris – Duke Ellington presents the Dollar Brand Trio – and invitations to perform at key European festivals, and on television and radio during the next two years.

In 1965, the now married couple moved to New York. After appearing that year at the Newport Jazz Festival and Carnegie Hall, Dollar Brand was called upon in 1966 to substitute as leader of the Ellington Orchestra in five concerts. Then followed a six-month tour with the Elvin Jones Quartet. In 1967 he received a Rockefeller Foundation grant to attend the Julliard School of Music. Being in the USA also afforded him the opportunity to interact with many progressive musicians, including Don Cherry, Ornette Coleman, John Coltrane, Pharaoh Sanders, Cecil Taylor and Archie Shepp.