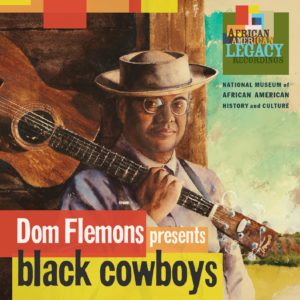 ‘Black Cowboys’ is the new album from multi-instrumentalist, songster, and co-founding member of the GRAMMY Award winning Carolina Chocolate Drops, Dom Flemons. More than a collection of songs from the “Wild West,” the record sheds light on the prominent but often overlooked role African American pioneers played in westward expansion.

In 2018, Smithsonian Folkways Recordings celebrates its 70th anniversary, honoring Folkways founder Moses Asch’s mission to “document the people’s music.” As a musical torchbearer and innovator, Dom Flemons is committed to extending and reinterpreting Asch’s legacy in the modern age. Joining him on this year’s extensive release schedule are avant-garde folk duo Anna & Elizabeth, Iraqi-American oud virtuoso Rahim AlHaj, Tejano giants Los Texmaniacs, and special projects that include the ‘Smithsonian Anthology of Hip-Hop and Rap,’ a topical box set on ‘The Social Power of Music,’ and extensive retrospectives on Folkways greats Pete Seeger and Barbara Dane.

Listen to this 3-song sampling of the record.

The first album of its kind, ‘Black Cowboys’ takes the listener on an illuminating journey “from the trails to the rails” of the Old West. The 18-song set traverses a varied soundscape featuring string blues, old-time square dance music, and cowboy poetry. Flemons is joined by a celebrated group of backing musicians throughout the record, such as GRAMMY-winning bluesman Alvin “Youngblood” Hart, Jimbo Mathus (Squirrel Nut Zippers), and decorated folklorist and Folkways’ director emeritus Dan Sheehy, who co-produced the album.

From the first, plaintive line sung on the album opener, a field holler called “Black Woman,” it’s clear that Flemons’ relationship with this material runs deep. Indeed, in 2016, Flemons himself followed the westward path taken by Lewis and Clark and their slave, York, “crossing every original cattle trail and Indian trading post along the way.”

In addition to the album’s re-worked traditional songs, Flemons includes original songs written specifically for the occasion. “One Dollar Bill” reflects on the portrayal of black cowboys in Hollywood Westerns, “He’s a Lone Ranger” tells the story of Bass Reeves (an escaped slave who became the first African American Deputy US Marshal west of the Mississippi), and “Steel Pony Blues” pays tribute to Nat Love, the former slave turned Pullman porter who spent time as a rancher in Flemons’ native state of Arizona.

Flemons is also a historian, music scholar, and collector. He has long carried a torch of awareness that many traditional American songs and tunes in fact originated from, or were influenced by, the musical and storytelling traditions of African Americans and Native Americans. Flemons illustrates the complex cultural exchange that happened on the frontier in the 40-page liner notes booklet, reminding us that the American West was a much more diverse environment than old Western films and dime novels would have us believe. On his rendition of “Home on the Range,” arguably one of the most celebrated Western songs of all time, Flemons explains that the popularized version came from a variant recorded in 1908, sung by a black bartender in San Antonio.