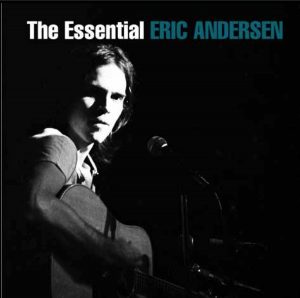 “Eric Andersen is one of our finest singers and songwriters, in the most literal sense of that tradition… the most elegant of singers.” David Fricke (Rolling Stone Magazine)
“A singer and songwriter of the first rank.” (The New York Times)
“An American master.” Robert Palmer (Ghosts Upon the Road liner notes)
“Eric Andersen is a great ballad singer.” (Bob Dylan – live on stage at the Oslo Spektrum)

Eric Andersen first came to prominence as a performer in Greenwich Village in the early 1960s and immediately became part of the Village folk and songwriter scene along with Phil Ochs, Tom Paxton, Dave Van Ronk, Bob Dylan, and was at the epicenter of the American Greenwich Village singer-songwriter explosion.

Bob Dylan’s version of Eric’s song “Thirsty Boots” was released as a single on Record Store Day and also appears on the Dylan CD Another Self Portrait.

Over the past 50 years, Eric has toured the world and released over 30 CDs of original music including Blue Rain (Appleseed Recordings) his first live concert recording in Oslo with the band Spoonful of Blues, released in 2007. In the early 1990s Andersen recorded 2 trio-harmony albums with The Band’s Rick Danko and Norwegian singer Jonas Fjeld (Danko/Fjeld/Andersen). He’s featured in the Joni Mitchell American Masters documentary, the Wildflower Festival DVD with Judy Collins, Tom Rush, and  Arlo Guthrie, the rock film Festival Express and the documentary Greenwich Village: Music That Defined a Generation.

In 1990 Eric won the New York Music Award for his album Ghosts Upon the Road, in 1992 the Spellemannprisen (Norwegian Grammy) for “Danko/Fjeld/Andersen” and in 2003 The Premio Tenco award with Patti Smith in San Remo, Italy, which is an award given to outstanding songwriters. Previous Premio Tenco awards have gone to Randy Newman, Tom Waits, Joni Mitchell, Leonard Cohen, and Lou Reed.

Under the Shadows
– Eric Andersen