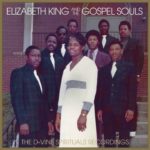 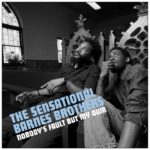 The Sensational Barnes Brothers
Nobody’s Fault But My Own
September 20, 2019

For Chris and Courtney Barnes — aka The Sensational Barnes Brothers — old school gospel comes as naturally as falling rain. They’ve sung together all their lives, but with their new eponymous debut album, the first release of the Bible and Tire Recording Co. label, things are clicking for the duo like never before.

Produced by Bruce Watson of Bible and Tire Recording Co./Big Legal Mess Records at Delta-Sonic Studios in Memphis, all of the songs on the record were chosen from the oft-forgotten 1970s catalog of the Designer Records label. This deep well of material will be featured more in future releases by Bible and Tire, created to spotlight the rich, living traditions of raw Southern gospel. For now, the Designer catalog is made new by the unique chemistry of this brother team. Along the way, they’re joined by a cast of tastefully gritty players like Will Sexton, Jimbo Mathus, and George Sluppick, not to mention Chris and Courtney’s brother Calvin, all of whom bring the tough soul-stomping sound of Memphis into the current era.

And for the Sensational Barnes Brothers, the new album also expresses an unbreakable bond with the past: their own father, Calvin “Duke” Barnes. The one song he guests on could well have been written by the Barnes family themselves. For there, in a nutshell, are all the bonds that hold them close.

“Son, just keep on, keep doing what you’re doing. Let it be good,” sings the father on one track, and his grown boys, standing close by, echo his words. “Let it be good.”

Chris Barnes was a little stunned to hear the song as they combed through hundreds of Designer tracks with Watson one day. “We were listening to the song and the guy on the recording sounded just like my daddy. I was like, ‘We gotta do this song!’ And the message really stuck out to us.”

“You can hear all the conversations he used to have with you through that one piece of music,” adds brother Courtney. It’s a poignant moment, for only three months after the brothers invited him to sing on their album, Duke Barnes passed away.

“You’re always counting your days, learning how to number your days,” reflects Courtney. “Count it all joy, and we’re thankful for the life that he lived and that he gave.”

“Going through your trials, I guarantee you, trouble gonna come and you need something. Music soothe your mind. You still be in pain but you can sleep,” says Elizabeth King of the power of gospel music, during a conversation upstairs at producer Bruce Watson’s Delta-Sonic Studio in her hometown of Memphis, TN.

This first reissue from the D-Vine Spirituals Recordings showcases King, who has an incredible ability to simmer and then raise the heat. The gospel hit from King’s pen, “I Heard the Voice” is only the tip of the iceberg. Witness her intensity on “Jesus Is My Captain,” with a wah-wah guitar grooving, which also drives the funky “Wait on the Lord.” “Down Here Waiting” is the very definition of a Memphis backbeat. “I Found Him” finds her singing, “I found him to be my hellhound chaser. I found him to be my midnight rider.” The traditional “I’ll Fly Away” is done here a la Chuck Berry’s “Maybellene,” fast and joyful.

Born in Grenada, MS, King grew up in Charleston to a mother who taught her to sing. “I would sing hymn songs,” she says. Often ill as a child, she turned to song as a way to get through. As she grew up, she learned to interpret them in her own style. She laughs as she says, “I like to move when I sing.”

Married and moving to Memphis in 1960, followed by a short stint in Chicago (“I couldn’t get used to the weather or how they went to church”), then back to Memphis, King first joined the Gospel Souls in 1969 after seeing them in concert. (The male vocal band had previously been on Halo Records and Designer Records, the latter catalogue explored in several exemplary Big Legal Mess releases.) She had always envisioned being backed by male singers. She was told, “If they got jealous wives, I wouldn’t.” But it worked out. She says, “I stayed 33 years with them.”

Producer Juan D. Shipp, a gospel DJ-cum-label impresario, thought he would get a richer sound than the gospel music studios in common use in Memphis at the time when he stumbled on Tempo Studios downtown, which became his go-to. “It was a compact studio but boy did it sound good,” Shipp recalls, continuing, “You had to walk up the stairs to it.” He first recorded King and the Gospel Souls in 1972, issuing “I Heard The Voice” (which was later sub-leased to the Messenger label).

Shipp continues, “When you come to the studio, I worked the devil out of you to make it what it should be. We were working at ‘I Heard The Voice.’ I said, ‘Sing it like you making love to God.’ That song skyrocketed. It was 5½ years at #1. Nobody could sing it like the original!”