Livestream each concert via the links below:

The series, which typically takes place at Carrboro Town Commons, was filmed at The Fruit in Durham, NC and will be broadcasted on Facebook and YouTube is hosted by Hillsborough, N.C.-based nonprofit Music Maker Relief Foundation, whose mission is to tend the roots of American music. The series will also be streamed on Soul Bag and Artarie.

Each installment of the series will open with a rare archival performance from one of North Carolina’s music masters. These legends have either been showcased at previous Freight Train Blues performances or performed in Carrboro over the years.

Freight Train Blues celebrates the life and legacy of Piedmont blues legend Elizabeth “Libba” Cotten, born in 1893 in Carrboro, NC and recipient. Of the National Heritage Fellowship awarded by the National Endowment for the Aats. Some of her best-known compositions, like the now-standard “Freight Train” and “Shake Sugaree,” have been canonized into the repertoires of American popular culture, with the latter interpreted by the Grateful Dead. Her enduring legacy was featured earlier this year in a piece from Good Morning America, who said she was “a master storyteller.”
Freight Train Blues honors Elizabeth Cotten’s contributions to American roots music by highlighting the cultural significance, diversity, and vitality of her North Carolina community and its connections to artists across the nation.

May 14 – Alexa Rose – Alexa Rose was born in the Alleghany Highlands of western Virginia, raised in the tiny railroad town of Clifton Forge. Though no one in her immediate family played or sang, she inherited a deep musical legacy. That visceral connection is at the core of Rose’s debut album, Medicine for Living (Big Legal Mess). Opening performance: PBS News Hour and Rolling Stone-featured vocalist Pat “Mother Blues” Cohen.

May 21 – Amythyst Kiah – With an unforgettable voice that’s both unfettered and exquisitely controlled, Tennessee-bred singer/songwriter Amythyst Kiah is redefining the limits of roots music. Growing up a Black and LGBTQ+ woman in the Bible Belt, she experienced social anxiety, grief, alienation – and ultimately, the hard-won triumph of total self-acceptance. Kiah’s debut for Rounder Records, the standout track “Black Myself,” was originally recorded with Our Native Daughters. It earned a 2020 GRAMMY Award nomination for Best American Roots Song and won Song of the Year at the 2019 Folk Alliance International Awards. Kiah’s new version of “Black Myself ” — radically reimagined with the help of producer Tony Berg (Phoebe Bridgers, Amos Lee, Andrew Bird) — represents a stunning expansion of her sound into the world of iconoclastic alternative rock. Opening performance: Mississippi’s sacred soul trio The Como Mamas.

May 28 – Johnny Ray Daniels – Farmville, NC based Sacred Soul artist Johnny Ray Daniels is best known for his lifelong stint as guitarist and vocalist for the legendary Glorifying Vines Sisters. The Glorifying Vines Sisters, a group composed of five sisters, their husbands and children toured the church circuit throughout the South from the 1950s to present. Several of their singles recorded for regional labels including Pinewood and Shurfine remain prized finds among rare 45 collectors. More recently they have played Telluride Blues and Brews and Switzerland’s premier blues festival Blues to Bop. Daniels’ first recording under his own name, “Somewhere to Lay My Head” was recently released on the critically acclaimed Hanging Tree Guitars compilation. Pop Matters called it a “momentary reprieve from the worries of the world,” continuing, “Daniels’ music is rooted in the South, with intersections of the blues and gospel.” Opening performance: the legendary Piedmont master Etta Baker.

June 4 – The Hamiltones – The three men who comprise soul star Anthony Hamilton’s background singers, The Hamiltones, have through an infectious series of viral video performances become known entities in their own right. Not since Perri have background soul singers become as instantly recognizable to the general public as these three exceptionally talented young men from Charlotte, North Carolina. Since then, The Hamiltones have been featured on The Breakfast Club, Steve Harvey Morning Show, sold out The Apollo, and have been featured on four GRAMMY-nominated albums; including Anthony Hamilton, PJ Morton, Johnathan McReynolds, and Tori Kelly. Opening performance: “Chapel Hill Boogie” singer John Dee Holeman

June 11 – Harvey Dalton Arnold – Harvey Dalton Arnold is a North Carolina bred southern gentleman who took to the musical road in his teens. While playing bass for a band in Florida, he received an offer to audition for the now legendary southern rock group The Outlaws on a Saturday night. By the following Saturday, he already had a stadium gig under his belt opening for Johnny Winter and Lynyrd Skynyrd. He toured extensively and participated on classic albums with The Outlaws from 1976 through 1980. Always having a love for the blues, Harvey’s first solo release was a blues album. His brand new effort “Stories To Live Up To” on Music Maker Recordings is a collection of songs and stories that showcase his writing and influences. Opening performance: outsider lounge music by Captain Luke and Cool John Ferguson.

Since 1994, Music Maker Relief Foundation (MMRF) has helped over 500 musicians and has been featured on ABC, PBS NewsHour and NPR Weekend Edition. Through its sustenance program, elderly roots musicians living in poverty are given critical support in the form of monthly grants and emergency funding when needed.

In addition to its Sustenance Program, MMRF also books performances for their artists, most of which have been cancelled or postponed. Unfortunately, as a working musician, there is often little in the way of a retirement savings or safety net to carry them through uncertain times. Music Maker hopes that the series will return to its well-loved in person format for 2022. 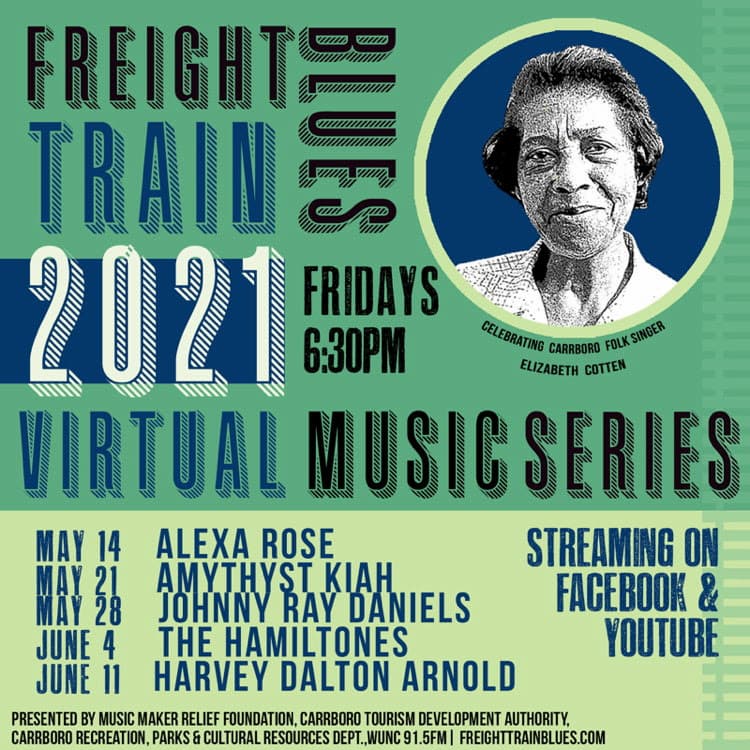