The vinyl-led London-based Gearbox Records has cemented itself as a leading indie label for jazz, funk, and more, recently surpassing fifty full-length releases and twelve years in operation. What started out as a focus on previously-unreleased archival jazz recordings has now branched into contemporary jazz, funk, electronic music, folk, and more.

The Independent (UK) said, “With its satisfyingly fat vinyl platters, audiophile-friendly digital and imaginative catalogue of rediscovered gems (plus new recordings), LP specialist Gearbox is becoming one of the wonders of the age.” Downbeat Magazine echoed, “Gearbox runs on the adoration of music.”

The label’s new developments are as follows:

This year, Gearbox opened a Japanese office, making it one of the first independent labels to do so and contributing to Gearbox’s ongoing evolution into a global label. This will see more international artist signings and limited regional pressings, in addition to Japanese distribution and the label’s own multi-territory direct fulfilment network which enable Gearbox to reach more fans than ever before. Founder and head producer Darrel Sheinman’s admiration and appreciation of Japanese culture led him to introduce monthly “kissaten”-styled listening sessions to the Gearbox studio, open to the public, which proved popular and have resulted in a monthly residency on London’s Soho Radio show. Sheinman explains more about the decision here.

Last year, Gearbox released the high-end Automatic MkII portable turntable. Improving on the original Gearbox Automatic design, the MkII model features an upgraded belt drive with aluminum pulley to ensure better speed stability and high-quality components, meaning the sound is astonishing for its price class. This you would expect from Gearbox of course, but it also does things no other turntable has ever done before. What also sets this turntable apart is the high-fidelity built-in valve phono stage, a first, which has been designed and tuned for moving magnet cartridges such as the pre-fitted Ortofon OM10. This means that one can plug the turntable straight into any line input and enjoy the warm and open acoustics, right from the box. In addition, it has on-board music recognition technology that allows listeners to add tracks from their record collection to Spotify playlists with the swipe of a finger, connecting analogue with the future. GQ said, “A turntable guaranteed to turn heads … suitable for both novice and experienced vinyl users.” Unboxing video.

The label has established direct-to-fan sales capabilities in the United States and is launching with several limited edition releases:

December 11 will mark the release of London sax and drum duo Binker & Moses’ ‘Escape the Flames’ live album on clear, hand-numbered double vinyl limited to 500 copies. This will not be available via retail. Those who know the duo will appreciate that every Binker and Moses performance is distinct in itself, characterized by a mutual spontaneity and a tireless interrogation of the infinite.

Binker and Moses’ (pictured below) debut album ‘Dem Ones’ will also be available February 5 on hand-numbered, limited edition, clear vinyl.

A Japanese pressing of Don Cherry’s ‘Cherry Jam’ album will be available in the US. According to the liner notes, “Our recording is taken from the original tape of a 1965 radio broadcast, programmed by Denmark’s national radio station. It was in this same year that Cherry would record his landmark Blue Note recording, ‘Complete Communion.’”

Japanese editions of fifteen top titles from the Gearbox catalog will be made available on LP and CD, each in limited quantities in the US, from early December. The first six titles, out now via direct channels, are as follows: 2019 National Endowment for the Arts Jazz Master and piano great Abdullah Ibrahim’s ‘The Balance,’ Binker Golding’s ‘Abstractions of Reality Past and Incredible Feathers,’ ‘Live at Ronnie Scott’s January 15, 1966 ‘ by Yusef Lateef, Theon Cross’ ‘Fyah,’ Binker and Moses’ ‘Journey to the Mountain of Forever,’ and the lost treasure ‘Mønk’ featuring the legendary Thelonius in his prime.

In addition, the Gearbox mastering and cutting studio in King’s Cross, London has distinguished itself as an all analogue production facility, specializing in reel-to-reel mastering for vinyl cuts and digital masters. The studio also features vacuum tube tape machines for all formats and speeds, rare and hi-end mastering equalization and Audio Note monitoring amps. The studio also has direct-to-disc capabilities which result in a startlingly present quality, for example on Butcher Brown’s ‘Camden Session.’

A drummer from the age of thirteen, label founder and head Darrel Sheinman played in various punk bands before moving to jazz, groove, and funk. While pursuing successful careers as a commodities trader and maritime security professional, Darrel continued to nurture his passion for music via his habitual crate-digging for rare, original Blue Note pressings and a strong addiction to high fidelity audio. In 2009, this led to a change in career path and the beginnings of Gearbox Records.

Initial Gearbox output stemmed from Darrel’s explorations of the British Library archives, which led to a slew of first-time commercial releases from cult British jazz icons that included saxophonist legend Tubby Hayes and pianist Michael Garrick. Under the mentorship of famed engineer Sean Davies, Darrel was inspired to build an all-analogue cutting and mastering studio based around vintage vacuum tube tape machines and a 1967 Haeco Scully lathe, to which one can attribute the signature “Gearbox sound.”

More recently and under Darrel’s A&R leadership, Gearbox has been at the forefront of the UK contemporary jazz revival, having released music with acts such as Binker & Moses, Theon Cross, and Sarathy Korwar. As well as jazz, Gearbox has evolved organically into other genres and styles of music, from Brazilian no wave to ambient electronic to lo-fi soul, with a focus on quality being the deciding factor. 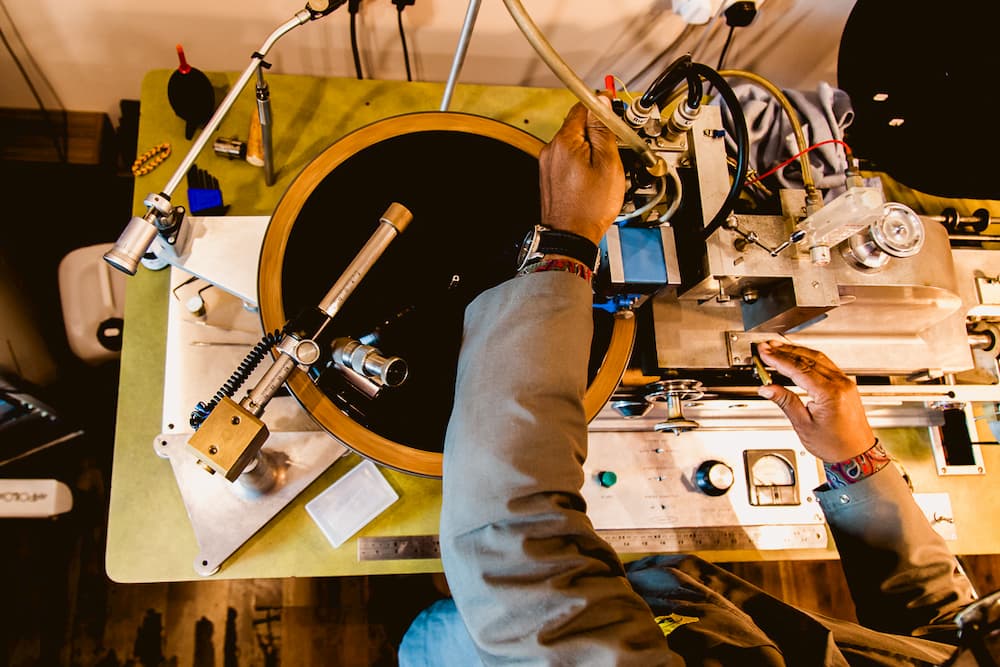